Book Review- The House of the Scorpion 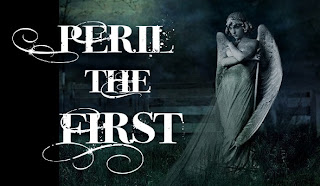 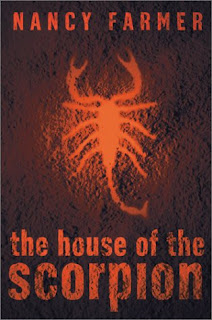 The House of the Scorpion
By Nancy Farmer
2002
380 Pages
From Inside Cover:
At his coming-of-age party, Matteo Alacran asks El Patron's bodyguard, "How old am I?...I know I don't have a birthday like humans, but I was born."
"You were harvested," Tam Lin reminds him. "You were grown in that poor cow for nine months and then you were cut out of her."
To most people around him, Matt is not a boy, but a beast. A room full of chicken litter with roaches for friends and old chicken bones for toys is considered good enough for him. But for El Patron, lord of a country called Opium-a strip of poppy fields lying between the U.S. and what was once called Mexico-Matt is a guarantee of eternal life. El Patron loves Matt as he loves himself for Matt is himself. They share identical DNA.
As Matt struggles to understand his existence, he is threatened by a sinister, grasping cast of characters, including El Patron's power-hungry family. He is surrounded by a dangerous army of bodyguards and by the mindless slaves of Opium, brain-deadened eejits who toil in the poppy fields.
And escape from the Alacran Estate is no guarantee of freedom because Matt is marked by his difference in ways he doesn't even suspect.
My thoughts:
Main character Matt is the clone of a powerful drug lord, El Patron. Matt is born into a time when rich and wealthy men harvest organs of clones to prolong their lives. El Patron has lived to be 140 years old with the help of transplants. It's perfectly legal and clones are considered no better than cattle. Usually clones have their intelligence destroyed at birth but El Patron decides to give Matt a normal upbringing and entrusts his care to a loyal servant named Celia. Matt submerges himself in music, excels in math and learns everything about the business he believes that he will eventually run. As Matt grows up he faces the hatred and prejudices people have of clones and eejits.Truths of why he exists are slowly revealed and the horror of his situation comes to light. Escape becomes his only option.
Matt is a character full of hope and courage as he tries to figure out who he is in spite of why he was created. A fast paced story that takes the reader on a journey with Matt from the moment of his conception and up into his teen years.
Because so much has happened with stem cell research, immigration and cloning in the last few years I think that this book would be an excellent one for a class discussion or a great book club choice. There are many moral choices the characters in the story face.
I chose this book as the kick off to the R.I.P. Challenge. It came highly recommended to me by teens when I worked at the public library. After finishing the book I struggled to categorize this novel- Is it science fiction or dystopian? Maybe it's a mystery? It also had the elements of suspense and horror throughout. I'm not really sure which category The House of the Scorpion falls into is my point. Maybe it's just one of those books that can't be put into one genre and should be enjoyed for what it is-a really good read.
I borrowed this book from the Salmon Public Library. I would recommend this to readers 12 and up.
at September 20, 2011