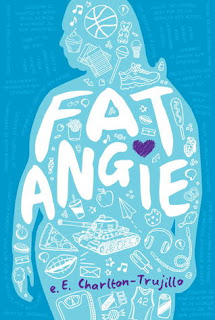 FAT ANGIE
By e.E. Charlton-Trujillo
2013
Summary taken from Goodreads:
Angie is broken — by her can’t-be-bothered mother, by her high-school tormentors, and by being the only one who thinks her varsity-athlete-turned-war-hero sister is still alive. Hiding under a mountain of junk food hasn’t kept the pain (or the shouts of "crazy mad cow!") away. Having failed to kill herself — in front of a gym full of kids — she’s back at high school just trying to make it through each day. That is, until the arrival of KC Romance, the kind of girl who doesn’t exist in Dryfalls, Ohio. A girl who is one hundred and ninety-nine percent wow! A girl who never sees her as Fat Angie, and who knows too well that the package doesn’t always match what’s inside.
My thoughts:
Sometimes it's really hard to find the right words to explain how much you connected with a book. Especially when a book comes along that completely blows you away and leaves you trying to write a review that will do it justice.
I can say that Fat Angie by e.E. Charlton-Trujillo for me was heartbreaking and inspiring.
But words aren't enough to describe the roller coaster of emotions I felt while reading this story.
The author bravely covers the heavy topics of bullying,cutting,death,suicide and war.
And here's the thing- e.E. Charlton-Trujillo's story telling is solid. It never feels forced or preachy- it's just in your face honest.
My emotions ran high as I at times forced myself to read on as Angie coped with life and problems. I was angered and outraged as she dealt with bullies that humiliated her and teachers that did nothing. My heart soared as she made deep connections with new girl KC Romance. My heart broke as she grieved for her sister missing in Iraq and desperately tried to build a relationship with her mother.
At times I had to put Fat Angie down because I felt emotionally drained.
This story made me feel enraged, exhilarated, sad and hopeful.
I felt such a deep connection with Angie that it was hard to say goodbye when her story ended.
I will say that Fat Angie is the best book I have read so far this year.
A GIANT thank you to e.E. Charlton-Trujillo for sending me this book to read and review.
at April 14, 2013