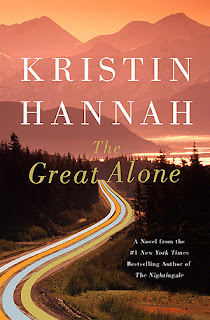 
Unpredictable. Unforgiving. Untamed.
For a family in crisis, the ultimate test of survival.

Ernt Allbright, a former POW, comes home from the Vietnam war a changed and volatile man. When he loses yet another job, he makes an impulsive decision: he will move his family north, to Alaska, where they will live off the grid in America’s last true frontier.
Thirteen-year-old Leni, a girl coming of age in a tumultuous time, caught in the riptide of her parents’ passionate, stormy relationship, dares to hope that a new land will lead to a better future for her family. She is desperate for a place to belong. Her mother, Cora, will do anything and go anywhere for the man she loves, even if means following him into the unknown.
At first, Alaska seems to be the answer to their prayers. In a wild, remote corner of the state, they find a fiercely independent community of strong men and even stronger women. The long, sunlit days and the generosity of the locals make up for the Allbrights’ lack of preparation and dwindling resources.
But as winter approaches and darkness descends on Alaska, Ernt’s fragile mental state deteriorates and the family begins to fracture. Soon the perils outside pale in comparison to threats from within. In their small cabin, covered in snow, blanketed in eighteen hours of night, Leni and her mother learn the terrible truth: they are on their own. In the wild, there is no one to save them but themselves.

My Thoughts:
Wow! Where do I even start?

This is the first novel that I've ready by Kristin Hannah and so far the best book I've read for 2018. It was absolutely riveting. This was a book that I literally carried from room to room and read every chance I got.
The story is told from the point of view of daughter, Leni. She is caught in the middle of her parents very dysfunctional marriage. Set in the early 1970's after the Vietnam War Leni's father returns after being held a POW. He is a broken man but determined to make a fresh start with his family. One day he decides that packing the family up and moving them to the wilds of Alaska is the answer to all of their problems. Leni's  mom, Cora immediately has misgivings about the plan but is willing to follow her husband in hopes that he finds the peace and happiness that their family desperately needs.
When the family arrives in Alaska they find themselves grossly unprepared physically, mentally, and emotionally.
This book is a roller coaster of emotions. I found myself turning the pages as quickly as possible feeling rage, hope, sadness and joy.
Put this book at the top of your must read list, you won't regret it.