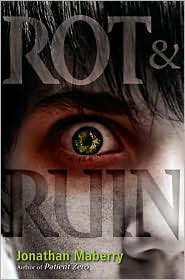 ROT and RUIN
By Jonathan Maberry
2010
458 pages
From Inside Cover:
In the zombie-infested world Benny has grown up in, teenagers must work once they turn fifteen-or they'll lose their food rations. Benny isn't interested in taking on the family business, but he reluctantly agrees to train as a zombie killer with his boring big brother, Tom. He expects a dull job, whacking zombies for cash. What he discovers is a vocation that will teach him what it really means to be human.
As his worldview is challenged again and again by the lessons he learns from Tom, Benny is forced to confront another horrifying reality: Sometimes the most terrible monsters are human.
My thoughts:
I'm not going to lie. I'm a sucker for a good zombie book. I love them! Jonathan Maberry has created something new and fresh-a zombie tale with emotion. After a series of failed jobs Benny has no choice but to work as his brother's apprentice in the family business as a bounty hunter-killing zoms or lose his food rations. Brother relationships are never easy but throw an unforgotten First Night(the night the world changed and 6 billion people died and came back from the dead) memory- In which Benny remembers being pulled from his screaming mother's arms by his older brother Tom. He remembers Tom running away and leaving his mother to die at the hands of a zombie. Benny resents Tom and thinks him a coward.
From the beginning-it's a complex relationship. Tom is both older brother and main caregiver, he's also very aware of Benny's feelings toward him. Benny is a typical teenager, trying to figure out who and what he wants to be-growing up in a untypical situation. Both are stubborn and hard headed which keeps them alive while hunting zoms in The Rot and Ruin. Through main characters Benny and Tom we are given a completely new look at zombies and the people they once were.
I never thought that I would read a story that would make me boo hoo over a mindless, wandering, flesh eater but there I was. Unbelievable! There are so many layers to this story. Maberry tells a coming of age story with action, horror, violence and love.
I can hardly wait to get my hands on the sequel Dust and Decay. I need to know what happens to Benny and Tom-where does there story go from here? I know I won't be bored!
at September 08, 2011