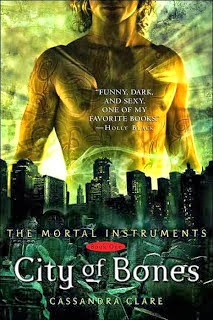 Synopsis taken from Goodreads:
When fifteen-year-old Clary Fray heads out to the Pandemonium Club in New York City, she hardly expects to witness a murder -- much less a murder committed by three teenagers covered with strange tattoos and brandishing bizarre weapons. Then the body disappears into thin air. It's hard to call the police when the murderers are invisible to everyone else and when there is nothing -- not even a smear of blood -- to show that a boy has died. Or was he a boy?This is Clary's first meeting with the Shadowhunters, warriors dedicated to ridding the earth of demons. It's also her first encounter with Jace, a Shadowhunter who looks a little like an angel and acts a lot like a jerk. Within twenty-four hours Clary is pulled into Jace's world with a vengeance, when her mother disappears and Clary herself is attacked by a demon. But why would demons be interested in ordinary mundanes like Clary and her mother? And how did Clary suddenly get the Sight? The Shadowhunters would like to know. . . .
My thoughts:
I really wanted to read this book before I see the movie.  And I have always loved the covers of the entire series. Family and friends  have long raved about these books so I admit I went in with high expectations and well.....City of Bones just fell flat for me.
It's not very often that I do a bad review on a book. In fact I can count on one hand how many time I have.
But maybe just maybe it's me not you, Cassandra Clare. Sometimes you just pick the wrong book when your in the wrong mood. And this could have very well happened in this case.
The first and only problem I had with City of Bones was I had absolutely no connection to the characters.
None. Zero. Zip.
Main character Clary, is an unremarkable and slightly annoying girl-she ran around mostly in a confused state almost the entire book. I got tired of the-Who am I, what am I doing and where am I suppose to be? Oh, and the "I want to scream but I have no air! Over and over and over......
But it wasn't just Clary that failed to get my attention-I also had a problem with Jace-Clary's love interest. He's angry and filled with inner turmoil. But wait, he's just a sensitive boy trapped in a rude boy's body!
Most of the book has our main characters running from place to place looking for a cup. Yup, a cup. When the super villian, Valentine is finally tracked down he's a downright laughable bad guy. His ruthlessness has been built up throughout the entire book and what do we get-evil laughter and sneers. Really?
But I guess the thing that just made me want to beg for my week of night time reading back was the BIG reveal at the end.....RELAX peeps, there will be no spoiler from me. It just made me gag a little and then throw the book on the floor.
So, let's sum CITY OF BONES up in one word-DISAPPOINTING.
Parental heads up-The main characters are fighting demons so of course it's going to get good and gory.
So I'm curious, did you think it was a good book and please tell me why. I have the second one in the series on my Nook. At this point I'm ready to delete it and move on. Or should I give Cassandra Clare one more chance?
at November 24, 2013 No comments: 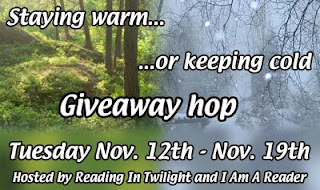 I'm choosing "Staying Warm" for Mug of Moxie Giveaway Hop! Fall is my favorite season, but sadly here in Idaho it's a blink of an eye before a cold north wind blows in and takes the leaves off the trees. Soon there is frost on the windows and snow flurries in the air.  I'm so not ready for winter!! It gets darn cold in Idaho for the winter so.... in hopes of "Staying Warm" I'm giving away an Amazon gift card worth $10.00, an awesome autumn candle that I just recieved from Flicker Box(see my review on this web site) and a a box of my favorite night time tea- TAZO calm chamomile.
A big thank you to I Am A Reader, Not A Writer and Reading In Twilight for hosting this fabulous hop.
This giveaway is open to US only! To enter this giveaway you must be a follower of Mug of Moxie. Please put your GFC name and a way to contact you in the comment box below. Thanks for following and hopping. The winner will be drawn on November 20th. 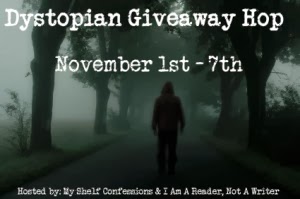 I LOVE DYSTOPIAN! It's one of my favorite genres which is why I wanted to participate in the Dystopian  Giveaway Hop because it gives me the opportunity to share with you a few of my favorite books. I can't recommend these three books enough....I LOVED THEM!
A big thank you to I Am A Reader, Not A Writer and My Shelf Confessions for hosting this fabulous hop. 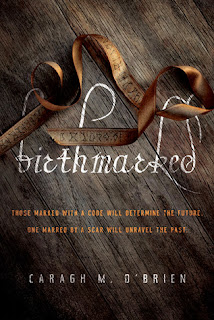 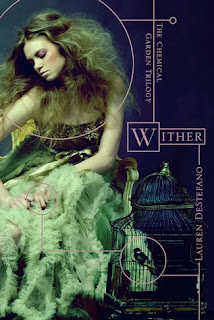 by Lauren Destefano
Both books are are great dystopian reads guaranteed to make you fear for the future. As an extra incentive LIKE my Facebook page-Mug of Moxie(look for the icon to the right of my website). I'll include a creepy ARC I just received from Amulet Books called
SICK 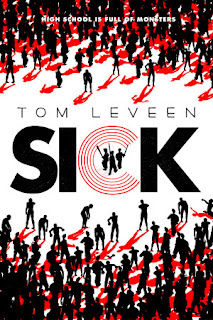 This giveaway is open to US only! To enter this giveaway you must be a follower of Mug of Moxie. Please put your GFC name and a way to contact you in the comment box below. Thanks for following and hopping. The winner will be drawn on November 8th
Good Luck and have fun!