In the mood for a mystery? 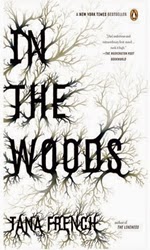 
Summery-In the Woods is a 2007 mystery novel by Tana French about a pair of Irish detectives and their investigation of the murder of a twelve-year-old girl.

Plot-Twenty two years prior to the novel's events, twelve year-old Adam and his two best friends failed to come home after playing in the familiar woods bordering their Irish housing estate. A search is organised and the Gardaí find Adam shivering, clawing the bark of a nearby tree, with blood on his shoes and slash marks on his back. He is unable to tell them what happened or where his friends are. They are never found and his amnesia holds to the present day. He now goes by his middle name, Rob, to avoid media attention and is a detective with the Garda Síochána's Murder Squad.
The novel circles around the murder of a twelve-year-old girl, Katy Devlin, whose case Rob and his partner Cassie Maddox are assigned to investigate. The body is found in the same woods where Rob's friends disappeared, at an archaeological dig site, and the coincidence is enough to make Rob nervous.
My thoughts- I have fallen in love with Tana French and the tales she tells. When I was working in the library a patron highly recommended her and I'm so glad I listened. The descriptions and language make it easy for the reader to submerge themselves into the story that takes place in Ireland. The characters are honest, interesting and flawed with fascinating backstories that flow easily into the mystery. I like that it's not horribly graphic, she can describe a good crime scene without gory details.
If you are looking for a good mystery to get lost in check this one out. And if you fall in love with her storytelling you'll want to jump into the next one called The Likeness which takes the character Cassie Maddox in a whole new crazy direction.
at November 07, 2014 3 comments: