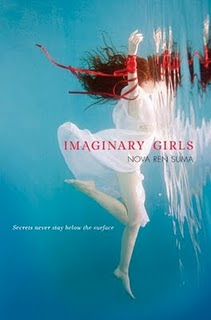 From the back cover:
Chloe's older sister, Ruby, is the girl everyone looks to and longs for, who can't be captured or caged. When a night with Ruby's friend's friends goes horribly wrong and Chloe discovers the dead body of her classmate London Hayes floating in the reservoir, Chloe is sent away from town and away from Ruby.
But Ruby will do anything to get her sister back, and when Chloe returns home two years later, a precarious and deadly balance waits....and watches. As Chloe flirts with the truth that Ruby has hidden deeply away, the fragile line between life and death is redrawn by the complex bonds of sisterhood.
My thoughts:
The cover and the tag line captured me. The photo of the girl is just breathtaking. White dress and red ribbon. It stopped me in my tracks and I want to read more. Then in the corner, just a simple line: Secrets never stay below the surface. DONE! Goosebumps! I'm buying the book-I NEED to know more. Genius!
Now the story-Two words come to mind. Complicated and intriguing. The relationship between Chloe and Ruby is complex. Ruby is a free spirit who has raised Chloe with no help from their drunken mother. Chloe is the little sister who adores who older sister. Ruby can do no wrong in her eyes. Sister relationships are never easy. Now throw in a dead body, a creepy reservoir and a secretive town.
I went into this story with no expectations. Later I discovered the divided reviews on Amazon. Some people loved the story and some didn't.
Nova Ren Suma has built a beautiful tale that twists the loyalty of sisters in with suspense and mystery. Page by page the layers of the mystery are peeled back and the truth of that fateful night and Ruby are slowly revealed. Chloe and the reader are kept in suspense until Ruby is ready to reveal truths. By the end of the story I couldn't turn the pages fast enough. I needed to know what happened that night and if it was fixable.
I think that Imaginary Girls is a beautiful ghost story. It leaves the reader with a few unanswered questions and haunting characters-as good ghost stories should.
I received this ARC as part of Good Golly Miss Holly ARC Tours. I'll be sending it on to the next reader in line. Thanks to Holly for giving me the chance to read and review this fantastic book.