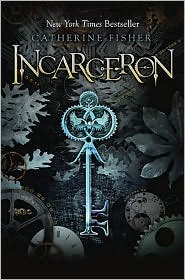 INCARCERON
By Catherine Fisher
442 pages
2007
From Inside Cover:
Incarceron is a prison unlike any other: It's inmates live not only in cells, but also in metal forests, dilapidated cities,and unbound wilderness. The prison has been sealed for centuries, and only one man, legend says, has ever escaped.
Finn, a seventeen-year-old prisoner, can't remember his childhood and believes he came from Outside Incarceron. He's going to escape, even though most inmates don't believe that Outside even exists. And then Finn finds a crystal key and through it, a girl named Claudia.
Claudia claims to live Outside-her father is the Warden of Incarceron and she's doomed to an arranged marriage. If she helps Finn escape, she will need his help in return.
But they don't realize there is more to Incarceron than meets the eye. Escape will take their greatest courage and cost far more than they know.
Because Incarceron is alive.
My thoughts:
I admit it. I picked this book up totally based on the reviews of other book bloggers. They raved-so I had to check it out. If I had read the inside cover first I probably would have not given it a chance. The plot just sounds too weird for me- I struggle with Fantasy.
The "IT" Factor-The Characters
The characters captured my attention right away. Finn and Claudia both have strong personalities so different yet the same-desperate to escape their situations. He in on the Inside and she is on the Outside. Escape is their highest priority. His from the prison-hers from a loveless marriage.
Finn's relationship with his oath brother, Keiro is complex and at times confusing. As is Claudia's relationship to her father. Does he love Claudia or is she just a bargaining chip? Wow!
The "ICK" Factor-The Prison
Incarceron is alive. A society decides to lock away the bad guys. They lock em up and throw away the key. People forget about Incarceron. Centuries pass and life goes on. Eventually the prison come to life-becomes a living, breathing thing. WTF? I just couldn't get into it.
Would I recommend to other readers?
Yes!
Undoubtedly other readers have the imagination for the parts I struggled with and would very much enjoy the entire story.
The sequel to Incarceron is called Sapphique and I will definitely read it. Incarceron leaves the reader on a cliff hanger and I really want to know what happens to the characters that I've grown to know and love.
at December 11, 2011