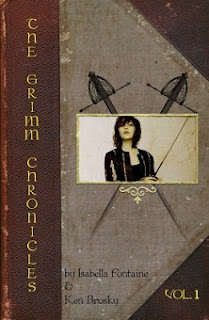 Summary Taken From Amazon.com:
200 years ago, the Brothers Grimm unleashed their stories upon the world. Literally. Now the characters of the Grimms’ stories walk among us. With every day that passes, they grow more evil. They are the Corrupted, and only a hero can stop them.
For 18-year-old Alice Goodenough, that means taking precious time off from her summer vacation. In addition to volunteering at the local library, Alice must stop the Corrupted who are now actively hunting her down. With the help of her magic pen and her trusty rabbit friend, the world has suddenly gotten a lot more complex. The Corrupted are everywhere, and only Alice can see them for what they truly are.
This book contains the first 3 episodes of the critically acclaimed series:
Episode 1: Prince Charming Must Die!
Episode 2: Happily Never After
Episode 3: Revenge of the Castle Cats
My Thoughts:
There is nothing I love more than a twist on a classic fairy tale. It seems like the Grimm Brothers are getting some respect lately.
Volume 1 of the Grimm Chronicles contains 3 episodes in Alice Goodenough's life. Each episode contains a character and back story from a Grimm Brother's tale-Prince Charming, Cinderella, and the Seven Dwarfs.
Alice is a normal teenager living a pretty average life-she goes to high school, hangs out with her cute boyfriend, has dorky parents, etc. It all changes one day when she finds an old pen while putting away books in the basement of the library she works at. The moment she picks up the pen she finds out that she is a "hero" and it's now her job to rid the world of the "corrupted". Luckily, in all the confusion and new responsibility she has a mentor/trainer in the form of a big furry white rabbit-yes, a rabbit- to help her understand her new role in life.
I like that the main character Alice is a strong, independent, female who has to think her way through the situations she finds herself in. She also knows how to use a sword and takes fencing classes-how cool is that? AND she works in a library as a volunteer-big "like" points for that!
I wasn't really into the Briar Rabbit sidekick-not being to familiar with the Briar Rabbit tales I was a bit confused by him and his role in Alice's life. He doesn't seem to be that much of a help-maybe he's more of a comedy relief? Perhaps he'll grow on me in upcoming episodes.
I would really like to see more of Seth in stories to come. I think he could really become a more helpful part of "Team Alice" with his savvy computer programming skills and subtle sense of humor.
I loved that the authors included a collection of Grimm Fairy Tales at the back of their book. That was an extra treat. It also helped familiarize me with lesser known tales and characters that were scattered through out their book.
I also really liked the lost diary of a past hero included in story-I hope we get more of that in upcoming episodes.
I'm very much looking forward to Volume 2 which will follow Alice through her senior year. I can't wait to see which Grimm characters will make an appearance and how Alice plan to take care of them. A very entertaining book!
Thanks to Ken Brosky for sending me a copy of the Grimm Chronicles to read and review.
at October 21, 2012