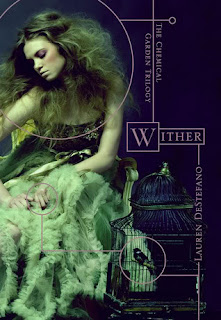 WITHER
By Lauren Destefano
358 Pages
2011
Taken from Goodreads:
By age sixteen, Rhine Ellery has four years left to live. She can thank modern science for this genetic time bomb. A botched effort to create a perfect race has left all males with a lifespan of 25 years, and females with a lifespan of 20 years. Geneticists are seeking a miracle antidote to restore the human race, desperate orphans crowd the population, crime and poverty have skyrocketed, and young girls are being kidnapped and sold as polygamous brides to bear more children. When Rhine is kidnapped and sold as a bride, she vows to do all she can to escape. Her husband, Linden, is hopelessly in love with her, and Rhine can’t bring herself to hate him as much as she’d like to. He opens her to a magical world of wealth and illusion she never thought existed, and it almost makes it possible to ignore the clock ticking away her short life. But Rhine quickly learns that not everything in her new husband’s strange world is what it seems. Her father-in-law, an eccentric doctor bent on finding the antidote, is hoarding corpses in the basement. Her fellow sister wives are to be trusted one day and feared the next, and Rhine is desperate to communicate to her twin brother that she is safe and alive. Will Rhine be able to escape--before her time runs out?Together with one of Linden's servants, Gabriel, Rhine attempts to escape just before her seventeenth birthday. But in a world that continues to spiral into anarchy, is there any hope for freedom?
My Thoughts:
I chose this book off the shelf because the cover took my breath away. It's a piece of art.
The fact that it was a dystopian book was the cherry on top!
This is a debut novel for author Lauren DeStefano and the first book in the planned The Chemical Garden Trilogy.
The story catches you attention from the first page. The main character is literally kidnapped off the street as she is walking to school and thrown into the back of a truck with a bunch of other girls. The story takes off at break neck speed from there.
I was transfixed as the Rhine finds herself taken from a place of desperation and uncertainty and dropped into a world of riches and luxury. Of course this comes with a price. She has been taken to be a bride, to bear children, and live in captivity until she dies.
Every moment is spent planning her escape and reunion with her brother who was left behind. But Rhine finds herself unintentionally growing close to her sister wives and even her new husband who longs for a connection and future with her.
As Rhine searches for a way out she stumbles upon an evil secret her father in law is keeping in the basement. Something much more sinister than kidnappings.
If she stays with Lindon she has loyalty, love and security. If she goes with Gabriel she faces the unknown with her freedom.
Either way Rhine is running out of time.
READ THIS BOOK!
at March 19, 2013