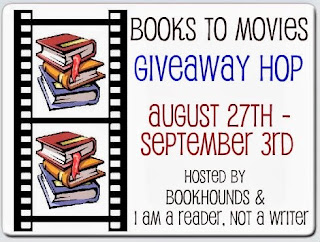 I'm so excited to be participating in this hop! Is there anything more exciting than your favorite book going to the big screen?
So there's three movies I'm super excited to see and I hope, wish, and pray that they do the books justice. You have a choice to pick your prize on this hop. I'm offering three super cool  books! You have to do the hard part and pick one.
A big thank you to Book Hounds and I Am A Reader, Not A Writer for hosting this hop.

THE MAZE RUNNER-
When Thomas wakes up in the lift, the only thing he can remember is his first name. His memory is blank. But he’s not alone. When the lift’s doors open, Thomas finds himself surrounded by kids who welcome him to the Glade—a large, open expanse surrounded by stone walls.
Just like Thomas, the Gladers don’t know why or how they got to the Glade. All they know is that every morning the stone doors to the maze that surrounds them have opened. Every night they’ve closed tight. And every thirty days a new boy has been delivered in the lift.
Thomas was expected. But the next day, a girl is sent up—the first girl to ever arrive in the Glade. And more surprising yet is the message she delivers.
Thomas might be more important than he could ever guess. If only he could unlock the dark secrets buried within his mind.

ENDER'S GAME
Once again, the Earth is under attack. An alien species is poised for a final assault. The survival of humanity depends on a military genius who can defeat the aliens. But who?
Ender Wiggin. Brilliant. Ruthless. Cunning. A tactical and strategic master. And a child.
Recruited for military training by the world government, Ender’s childhood ends the moment he enters his new home: Battle School. Among the elite recruits Ender proves himself to be a genius among geniuses. He excels in simulated war games. But is the pressure and loneliness taking its toll on Ender? Simulations are one thing. How will Ender perform in real combat conditions? After all, Battle School is just a game.
Isn’t it?

THE BOOK THIEF-
It is 1939. Nazi Germany. The country is holding its breath. Death has never been busier, and will become busier still.
Liesel Meminger is a foster girl living outside of Munich, who scratches out a meager existence for herself by stealing when she encounters something she can’t resist–books. With the help of her accordion-playing foster father, she learns to read and shares her stolen books with her neighbors during bombing raids as well as with the Jewish man hidden in her basement.

To enter this giveaway you must be a follower of Mug of Moxie. Please put your GFC name, your book choice and a way to contact you in the comment box below.  For an EXTRA entry "LIKE" me on Facebook. Icon is at the right of my sidebar. Thanks for following and hopping.
Good Luck and have fun!