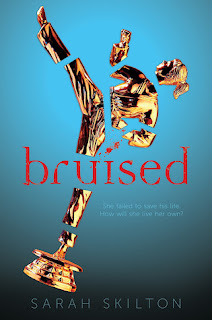 Summary Taken from Goodreads:
Imogen has always believed that her black belt in Tae Kwon Do made her stronger than everyone else--more responsible, more capable. But when she witnesses a holdup in a diner, she freezes. The gunman is shot and killed by the police. And it's all her fault.
Now she's got to rebuild her life without the talent that made her special and the beliefs that made her strong. If only she could prove herself in a fight--a real fight--she might be able to let go of the guilt and shock. She's drawn to Ricky, another witness to the holdup, both romantically and because she believes he might be able to give her the fight she’s been waiting for.
But when it comes down to it, a fight won’t answer Imogen's big questions: What does it really mean to be stronger than other people? Is there such a thing as a fair fight? And can someone who's beaten and bruised fall in love?
My Thoughts:
Wow!
Bruised is emotional, raw and honest.
Author, Sarah Skilton grabs the reader by the throat and doesn't let go from the very beginning. In the first few pages main character Imogen witnesses a horrible crime at a neighborhood restaurant. The event causes Imogen to suffer from PTSD and she doesn't remember the final moments in the diner.
The story unfolds as Imogen struggles to come to terms her sense of failure and her inability to act during the hold up. She's overcome by anger and frustration because she didn't use her Tae Kwon Do and stop the hold up from happening. Could she have stopped the robbery from occurring?
Is the gunman's death her fault?
My heart broke over and over reading Imogen's story. Sarah Skilton doesn't hold back in this amazing debut novel. The reader rides an emotional roller coaster as Imogen spirals into self destructive behavior that causes her to strike out at loved ones and friends as she sinks deeper into depression and sadness.
Imogen's journey is not an easy one as she works through her sense of self worth and puts the pieces of the puzzle together. But it's a journey worth taking. Imogen is unforgettable-she'll be on your mind long after you close Bruised.
My thanks to Amulet Publishing for giving me the opportunity to read and review this book.
at September 09, 2013