BOOK REVIEW-IF YOU KNEW MY SISTER 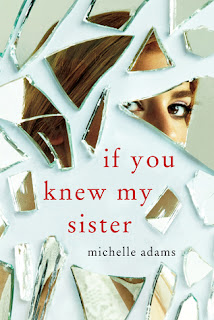 IF YOU KNEW MY SISTER
By Michelle Adams
Publisher: St. Martin's Griffin
375 Pages
2017

Goodreads Synopsis:
If You Knew My Sister tells the story of Irini, who was given away by her parents at the age of three, whilst her volatile, destructive sister was kept within the family. Twenty years later Irini receives a phone call from her estranged sister to say that their mother has died, compelling her to return for the first time to the family home, and to uncover the shocking truth that has defined both their lives.
My Thoughts:
I have some really mixed fillings about this book.
The Good-
Creepy is the word I would use to describe this book. There are definitely parts that are suspenseful.
My favorite character actually turned out to be the sister, Elle. She was an excellent "villian". She had me guessing what her next move would be throughout the book. I think the author did a great job of describing the complicated relationship of the two sisters. Irini is so desperate to have a family connection that she's willing to let Elle into her life even though she knows it will probably result in disaster. Elle clearly suffers from mental illness and I found myself feeling very sorry for her, even though she acted out in disturbing ways.
I think the most frustrating part of reading this book is that I failed to connect with the main character Irini. Throughout the book she continued to make so many poor decisions. She has a live in boyfriend, Antonio who is basically sponging off of her and draining her bank account, he is obviously using her-I know that love is blind but this guy is such a loser! There are several times that she ponders about the different ways that he's spending her money but never does anything about it.
She spends the entire book trying to get answers to some long buried secrets but every time she gets the chance to connect with someone from the past, like her father, she would suddenly veer off in another direction. So much time is wasted as she runs around in circles making poor decision after poor decision. At times I wanted to reach into the book and shake her while screaming, "Get your shit together!"
The Bad-
Irini never stops playing the "victim".  She played this part so well she should have carried body chalk around with her. I was so over it by the end of the book. But listen, I really seem to be in the minority of people who didn't care for this book. People rated it fairly high. So maybe it just wasn't the book for me.
at November 27, 2017

Email ThisBlogThis!Share to TwitterShare to FacebookShare to Pinterest
Labels: If You Knew My Sister, Michelle Adams