WHY AM I NOT SHOCKED?

THE HATE U GIVE BANNED BY TEXAS SCHOOL DISTRICT 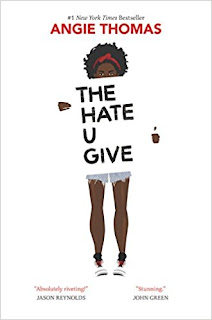 Angie Thomas is having quite the year. Her debut novel The Hate U Give debuted to widespread critical acclaim. It nabbed the number one spot on the New York Times list for young adult best-sellers and has enjoyed a comfortable 38 week stay on that list to date. It made the longlist for the National Book Award for young people’s literature and was the Boston Globe-Horn Book Award winner for fiction. It’s even been optioned for film adaptation. In rather less exciting news, The Hate U Give has been banned from the Katy Independent School District in Texas.
For full story go to Book Riot
at December 01, 2017

Email ThisBlogThis!Share to TwitterShare to FacebookShare to Pinterest
Labels: Angie Thomas, Banned Books, The Hate U Give