Can't-Wait Wednesday is a weekly meme hosted here, at Wishful Endings, to spotlight and discuss the books we're excited about that we have yet to read. Generally they're books that have yet to be released. It's based on Waiting on Wednesday, hosted by the fabulous Jill at Breaking the Spine.
This week I'm on pins and needles as I wait for the release of Goodbye, Sweet Girl by Kelly Sundberg 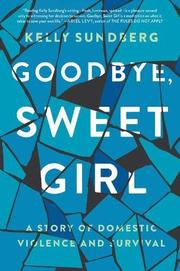 
An essayist’s debut memoir about her decade long struggle to leave a violent, emotionally unstable husband.
When Idaho native Sundberg met Caleb, whose “West Virginia drawl made him seem gentlemanly,” she had no idea that within six months, they would be engaged and pregnant. Both were in their 20s and equally unprepared for commitment. But the author chose to forget their relationship was neither “idyllic [n]or blissful” and “love him through my fear,” just as she had a childhood friend who had once chased her with a knife. Caleb’s dark side surfaced not long after their engagement, as they were returning from a hunting trip. Sundberg immediately assumed responsibility for his rage and felt “grateful” when he forgave her. Caleb’s sudden fits of anger soon became a permanent feature of their relationship, as did the heavy drinking he managed to keep hidden during their courtship. The author also discovered that Caleb had cheated on her with three women while they had been dating, but only after they had married. As with all of her husband’s other transgressions, she accepted his tearful apologies as proof that he would change. Sundberg became depressed enough that she sought out counseling. The therapist was able to name the destructive behaviors in her marriage for what they were: domestic violence. Nevertheless, the cycle of brutality and tenderness continued. Eventually, the author and her husband moved to West Virginia. There, the author began a graduate program and found the success Caleb did not have with his own writing. Only after an especially savage incident that required police and paramedic assistance was Sundberg finally able to move on from a broken relationship and begin the long process of healing her own life. By turns wrenching and lyrical, Sundberg’s book is an unflinching exploration of both domestic violence and one woman’s long, often painful evolution from codependence to self-respect.
A courageously honest memoir.
at May 30, 2018