BOOK REVIEW: "HOW HARD CAN IT BE?" 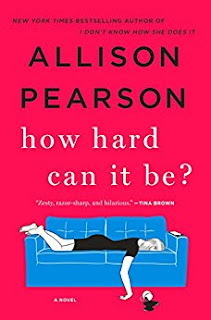 Look, I was doing OK. I got through the oil spill on the road that is turning forty. Lost a little control, but I drove into the skid just like the driving instructors tell you to and afterwards things were fine again, no, really, they were better than fine.
Kate Reddy had it all: a nice home, two adorable kids, a good husband. Then her kids became teenagers (read: monsters). Richard, her husband, quit his job, taking up bicycling and therapeutic counseling: drinking green potions, dressing head to toe in Lycra, and spending his time―and their money―on his own therapy. Since Richard no longer sees a regular income as part of the path to enlightenment, it’s left to Kate to go back to work.
Companies aren’t necessarily keen on hiring 49-year-old mothers, so Kate does what she must: knocks a few years off her age, hires a trainer, joins a Women Returners group, and prepares a new resume that has a shot at a literary prize for experimental fiction.
When Kate manages to secure a job at the very hedge fund she founded, she finds herself in an impossible juggling act: proving herself (again) at work, dealing with teen drama, and trying to look after increasingly frail parents as the clock keeps ticking toward her 50th birthday. Then, of course, an old flame shows up out of the blue, and Kate finds herself facing off with everyone from Russian mobsters to a literal stallion.
Surely it will all work out in the end. After all, how hard can it be?
My Thoughts:
When I first started reading this book I didn't realize that this was  a sequel to "I Don't Know How She Does It"(which, rumor has it is set to be a major motion picture starring Sarah Jessica Parker) I'll be crossing my fingers for that one because I think that both of these books would be fun to watch on the big screen. This book,"How Hard Can It Be?" can easily be a stand alone. I had no problem picking up where the first one left off and jumping right into Katy's life. Oh Katy! Her life is insane ,crazy,and chaotic. The title of the book is definitely meant to be tongue in cheek. Because Katy's life is spinning out of control as she navigates the joys of teenage angst, a husband how has gone new-age on her, caring for elderly parents, re-joining the work force, and being an ALMOST 50 year old menopausal woman. Needless to say,she has her hands very full. With the exception of the new-age husband I could absolutely relate to Katy and what was happening in her life. I guess that is what I liked best about this book, it really is so very true to life. It's messy,complicated, and exhausting. Author, Allison Pearson captures that perfectly. My thanks to St. Martin's Press for giving me the opportunity to read and review this book. I'll be donating it to my local public library.

Email ThisBlogThis!Share to TwitterShare to FacebookShare to Pinterest
Labels: Allison Pearson, How Hard Can It Be