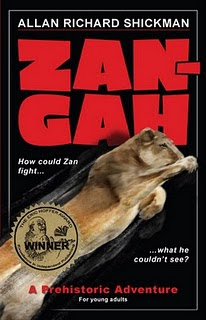 ZAN-GAH
By Allan Richard Shickman
150 Pages
2007
From Back Cover:
"She began to move warily in a circle as the men tightened the trap, and as they got closer the lioness began to stride and prowl in a circle so small that she almost seemed to be chasing her tail. But she was watching, watching while she turned and snarled, for a weakness in the ever-tightening ring of her pursuers. Then at the moment the attack finally was sounded-when the men, putting down their drums and torches, charged on the run with their spears-the lioness saw what she was looking for. One of her enemies was smaller, weaker than the rest. There was a point of the strengthening line that could be broken! Thought merged with furious action and the beast, with a mighty bound of astonishing swiftness, darted towards Zan. Five hundred pounds of snarling fury sprang directly at him with claws bared and fanged mouth open!"
My Thoughts:
This prehistoric adventure opens with a boy named Zan preparing to fight a lion that has been terrorizing their tribe. After a victorious fight Zan earns and new name Zan-Gah and the respect of the elders in not only his tribe but others as well. Soon after Zan decides that he must try to find his twin brother who disappeared years earlier. His travels take him to far away lands where he gets into some very interesting situations. I easily read the book in one night. The story was extremely engaging, the language and descriptions were rich and the characters were very easy to care about. I was very excited to see that there is a sequel to Zan-Gah. I can't wait to see where this story goes next.
I think this is the perfect adventure for junior high boys-This story would really hook a reluctant reader because of size(150 pages) and the non-stop action. But I wouldn't hesitate to recommend it to kids of all ages and adults of course!
A big thank you to EarthShaker books for providing me with a copy of this book to read and review. I will be donating this book to my local Middle School Library.
at January 17, 2011