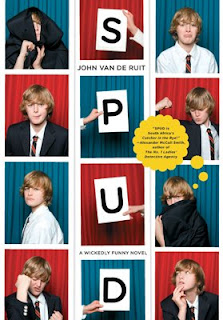 If you are looking for laugh out loud funny this is the book for you. Spud by John van de Ruit is one of the funniest books I have read in a while.
The story comes from John "Spud" Milton who attends an all boys boarding school in South Africa set in 1990. His tale is written by way of journal entries which relate his various adventures, trials and humiliations.
John rooms with a group known at school known as the "Crazy Eight" and they never fail to live up to their name. These 13 year old boys are full of schemes and trouble galore. He deals with feeling home sick, the insecurities of not fitting in and being marked as a lowly freshman. Not only is John dealing with the insanity at school but on his breaks he puts up with his crazy family at home. Which includes his paranoid, bottle loving father, his always on the edge mother and stark raving mad grandmother he calls the wombat.
We follow John through his first year of boarding school where he bonds with his crazy roomies, has his first crush, deals with power hungry upper class men and drunken teachers.
I found this book hilarious, honest and surprisingly tender.
I'm happy to say that this is the first book in a series featuring John "Spud" Milton. I can't wait to catch up with him and the rest of the crazy eight again.
I would reccomend this book for readers 14 and up. It's about thirteen year old boys so know that the topic of sex will be brought up, there is crude humor and some rough language.
Excellent Book! This book is available at the Salmon Public Library.
at April 02, 2009