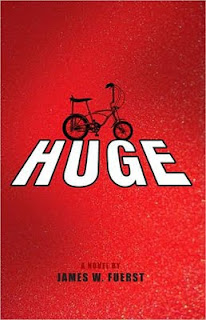 Taken from back cover:
Life hasn't been easy for Eugene "Huge" Smalls.
Sure, his IQ is off the charts, but that doesn't help much when your growing up in the 1980s in a dreary New Jersey town where your bad reputation precedes you, the public school system's written you off as a lost cause, and even your own family seems out to get you.
But it's not all bad. Raymond Chandler and Dashiell Hammett have taught Huge everything he needs to know about being a hard-boiled detective...and he's just been hired to solve his first case.What he doesn't realize is that his search for the truth will change everything for him.

ARRRGGGG! I really tried to get into this book. I really tried to like Eugene "Huge" Smalls. Okay, he's twelve. He's being raised by a single mom who works two jobs. He drives around a cruiser that he built himself out of spare parts from a junk yard and he has a stuffed frog, named Thrash as a side kick.
What I could'nt get past was that this kid has MAJOR anger issues and is a HUGE bully.
Page 66
Sure, Thrash was pretty sick, but his schemes for revenge didn't always work out like they were suppose to. Like that time Keith Montgomery was shooting spitballs at me on the cafeteria, I pretended to ignore him at first, then I circled behind him real casual, as if I were leaving, and then swung my lunch tray with both hands and whacked him in the back of the head as hard as I could. But Keith's head didn't go flying off like Thrash said it would; the light weight plastic just made a loud thunk against his skull and I got two weeks detention.
I tried to understand Eugene but I found and his mouth unlikeable. I struggled to finish the book and would have a hard time recommending it to anyone. Also be warned that there is a scene where Eugene is involved with some very heavy petting with another twelve year old.
Glad to be done with it and moving on.
at February 06, 2010