A BOOK WITH BITE 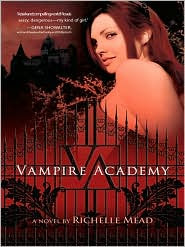 VAMPIRE ACADEMY
by Richelle Mead
2007
332 Pages
From Back Cover:
Lissa Dragomir is a Moroi princess: a mortal vampire with an unbreakable bond to the earth's magic. She must be protected at all times from Strigoi; the fiercest and most dangerous vampires- the ones who never die.
The powerful blend of human and vampire blood that flows through Rose Hathoway, Lissa's best friend, makes her a Dhampir. Rose is dedicated to a dangerous life of protecting Lisssa from Strigoi, who are hell-bent on making her one of them.
After two years of illicit freedom, Rose and Lissa are caught and dragged back to St. Vladimir's Academy, hidden deep in the forests of Montana. Rose will continue her Dhampir education. Lissa will go back to being Queen of the elite Moroi social scene. And both girls will resume breaking Academy hearts.
Fear made Lissa and Rose run away from St. Vladimir's-inside the Academy's iron gates, their world is even more fraught with danger. Here the cutthroat ranks of the Moroi perform unspeakable rituals, and their secretive nature and love of the night creates an enigmatic world full of social complexities. Rose and Lissa must navigate through this dangerous world, confront the temptation of forbidden romance, and never once let their guard down, lest the Strigoi make Lissa one of them forever.....
My thoughts:
Does anyone else think that the girl on the cover looks like Angelina Jolie?
This is the first book in the Vampire Academy series. We are introduced to Lissa and Rose who are in hiding from two enemies- the Academy and the Strigoi. The girls have actually run away from the Academy but are caught and taken back in the first chapter--don't worry I'm not giving anything away. The story starts to flow once they are taken back to the Academy and life resumes as it once was. We learn the dynamics of Rose and Lissa's relationship and the powerful bond that draws them together. Not only do they have some serious bad guys to watch out for-they also have to beware the hierarchy of high school. Which can be just as vicious and bloody as any gang of bad ass vampires. Once I learned everyone's title and lineage-Moroi, Strigoi, Dahampir, etc. it was easier to understand the story. I found it a little confusing at the first but it eventually sorts itself out.
I found the story intriguing and was disappointed when the end came. I look forward to the next book in the series called Frost Bite. I recommend this book for ages 14 and up for sexual content, language and drinking.
Our library does not carry this book but I was able to borrow it through Inter Library Loan.
at June 27, 2010