MOVIE REVIEW-One For The Money 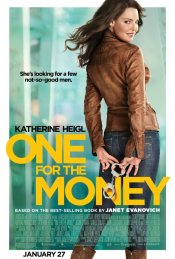 ONE FOR THE MONEY
SYNOPSIS:
A proud, born-and-bred Jersey girl, Stephanie Plum's got plenty of attitude, even if she's been out of work for the last six months and just lost her car to a debt collector. Desperate for some fast cash, Stephanie turns to her last resort: convincing her sleazy cousin to give her a job at his bail bonding company...as a recovery agent. True, she doesn't even own a pair of handcuffs and her weapon of choice is pepper spray, but that doesn't stop Stephanie from taking on Vinny's biggest bail-jumper: former vice cop and murder suspect Joe Morelli - yup, the same sexy, irresistible Joe Morelli who seduced and dumped her back in high school. Nabbing Morelli would be satisfying payback - and a hefty payday - but as Stephanie learns the ins and outs of becoming a recovery agent from Ranger, a hunky colleague who's the best in the business, she also realizes the case against Morelli isn't airtight. Add to the mix her meddling family, a potentially homicidal boxer, witnesses who keep dying and the problem of all those flying sparks when she finds Morelli himself...well, suddenly Stephanie's new job isn't nearly as easy as she thought.
1 hr. 31 min.- PG-13- Violence, sexual references and language, some drug material and partial nudity.
Director:Julie Ann Robinson
Cast: Katherine Heigl, Jason O'Mara, Daniel Sunjata, John Leguizamo, Sherri Shepherd
MY THOUGHTS:
The series by Janet Evanovich is one of my favorites. Especially when I'm in the mood for some laughs. The movie One For The Money is the first book that begins the story of Stephanie Plum and how she becomes a bounty hunter. Sadly, the movie doesn't catch the flavor of the book or the full personalities of the characters. It seemed like it couldn't decide weather it wanted to be a drama or a comedy and tried to settle half way between. It still had it's good parts. Grandma Maser is still a crack up and Ranger and Morelli are yummy without a doubt.
I don't think One For The Money made millions at the box office so I seriously doubt that there will be a Two For The Dough. And I really wish that made me sad. I say save your money and rent this one...... better yet just read the book.
at March 19, 2012

Email ThisBlogThis!Share to TwitterShare to FacebookShare to Pinterest
Labels: Janet Evanovich, movie review, One for the Money, Stephanie Plum