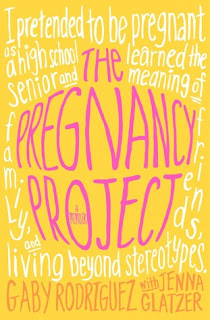 Summary Taken from Goodreads:
Growing up, Gaby Rodriguez was often told she would end up a teen mom. After all, her mother and her older sisters had gotten pregnant as teenagers; from an outsider’s perspective, it was practically a family tradition. Gaby had ambitions that didn’t include teen motherhood. But she wondered: how would she be treated if she “lived down” to others' expectations? Would everyone ignore the years she put into being a good student and see her as just another pregnant teen statistic with no future? These questions sparked Gaby’s school project: faking her own pregnancy as a high school senior to see how her family, friends, and community would react. What she learned changed her life forever, and made international headlines in the process.My Thoughts:
I remember when this was all over the media a couple of years ago. HIGH SCHOOL GIRL FAKES PREGNANCY! It was a hot news topic as we tried to wrap our minds around how and why.
So I was very interested and excited to read The Pregnancy Project, a memoir written by Gaby Rodriguez.
Gaby's story starts with an in depth background look at her family history, which explains how she came up with the concept of this unique project. You can tell it's very important to her to explain where she comes from and how she was raised. It really sets the pace for the story and gives the reader insight to Gaby's world.
She then takes us through the planning stages of the project, which had to be very thought out and organized. A few select people knew that Gaby's pregnancy was fake and them keeping a secret was imperative to the experiment.
Gaby explains that although she had really planned out the project from beginning to end, she was in fact not prepared for the loneliness and isolation that "her pregnancy" brought. She was surprised by how people's reactions and opinions made her feel. She sometimes had to remind herself that she was not pregnant and that there was an end in sight for her at the end of her nine months. She learns a great deal about not only those around her but about herself. I loved that she has a huge amount of growth in understanding and empathizing what a pregnant teen does go through.
Finally, we get to the reveal stage of the book where Gaby admits in a very public way-at a school assembly that she is not pregnant. The fallout is surprising in many ways.
I really liked this book. I think that it's an excellent read for middle school and high school. It would also be a great book club selection. Because the story is told by a teenager based on her experience I think kids can very much relate to her tale.
Looking back I wish that "the boyfriend" would have more of a voice in this story. I think his side and what he went through is also important. He had to pretend throughout this pregnancy-not even telling his parents that it was not real. A chapter devoted to that would have been a good addition.
A BIG thank you Simon and Schuster for giving me the opportunity to read and review The Pregnancy Project by Gaby Rodriguez.
I will be donating this book to my local Middle School Library.
at July 22, 2013